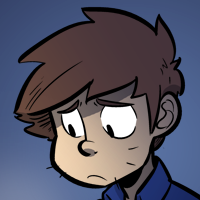 A meek little man who enjoys buff, militarized space crusaders almost as much as he enjoys little anime girls that don't wear pants. Matthew joined the Air Force as a way to escape his parents and become the man he always wanted to be. However, all he ended up becoming was an overseas desk clerk, and upon returning from an overseas relief tour, he was dumped right back into the crummy life he was running from. Now that he's back, he's ready to live the life he's always dreamed: locked up in a dark room with a harddrive of torrented ecchi and a case of Hot Pockets.

A big, fluffy ball of seething nerd rage and the primary owner of the apartment everyone seems to wind up at. Dan considers himself to be an S-tier hardcore gaming person, but his very specific tastes and over-assertive opinions tend to alienate everyone else in the world. Despite his permanent grumpy face and easily irritated nature, he can be a big ol' sweetie, especially to Kim (but never to Rinnie). His current occupation is a mystery to everyone.

The sweetest lil' cutie patootie in all of Sucre Marron. Sickeningly sweet, Kim is everyone's friend and nobody's enemy for long. She adores every member of the animal kingdom and is often burying her nose in either a good book or Dan's gut. Kim works part-time at a book store/coffee shop and spends most of her money on kung fu movies starring bone-break martial artist Johnny Panom. She'd like to one day write a story all on her own, but never seems to have the drive to start.

Once a champion in the fighting game community, Derrick came to realize that he knows absolutely nothing outside of the world of video games. Realizing that he only listens to video game soundtracks and exclusively watches game videos on the internet, Derrick vowed to expand his wordly knowledge. He still hasn't quite done that yet, but he manages to get by without being a total asshole like that Dan dude. Derrick currently works a boring retail job and is trying to figure out how to be a good date.

Hai Wu is a 90s kid obsessed with 80s culture and Power Rangers. A fellow video game pro like his good buddy Derrick, he attends Sucre Marron University and helps his uptight dad run a cultural novelty shop. Hai puts a lot of pride into his appearance, trying his best to be cool and trendy so he can impress friends and romantic interests alike. He has yet to grasp that it isn't really working as well as he'd think.

Tort is the corpulent one, Curt is the angry one, and Jenny is the pretty one. Together, they make up a hardcore trio of fighting game nerds living out in a townhouse on the outskirts of Sucre Marron. They're also all mad into pandering fanservice animes.