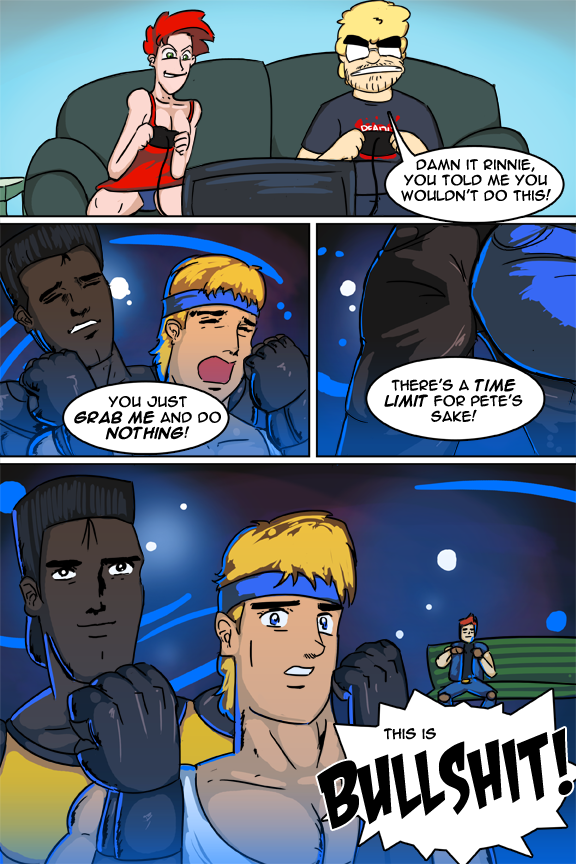 Ladies and gentleman, I’d like to present our first guest comic, brought to you by none other than my bro Kevfu! He does his own comic called Beat Warrior, which I’m pretty sure I’ve plugged before. If you haven’t checked it out yet, you better! It’s got DJ necromancers, hip-hop zombies, ï¿½ and some beautiful color and design. Hit that shit up!

Anyways, me and Leslie are in full-on crunch mode. We’re just slammin’ out the comics, left and right. We’ll have quite a huge stack of buffer when we’re done with this probably. And our new format change is going pretty well, and I think you’ll be pleased with the results. It’ll be like we’re an actual webcomic now!

We’re still accepting guest comics, y’know! Not too late to submit yours in! Because if you don’t, I have no idea what we’re going to put up instead for the update. I might actually have to draw something. Not Leslie, ME. And you don’t want to see what I draw. In fact, have this ancient portrait of critically-acclaimed video game critic Ben “Yahtzee” Croshaw I drew way back when.

THIS is what I’m capable of. Do you understand? You must deliver us more guest comics, or else the world will be subject to THIS AGAIN

Click the last few comics back to check out the guidelines and stuff. We’re incredibly anxious to see what you guys can do and promote other cool guys!

EDIT: New fanart up on the site, courtesy of Carriontrooper! Check out his deviantart here!