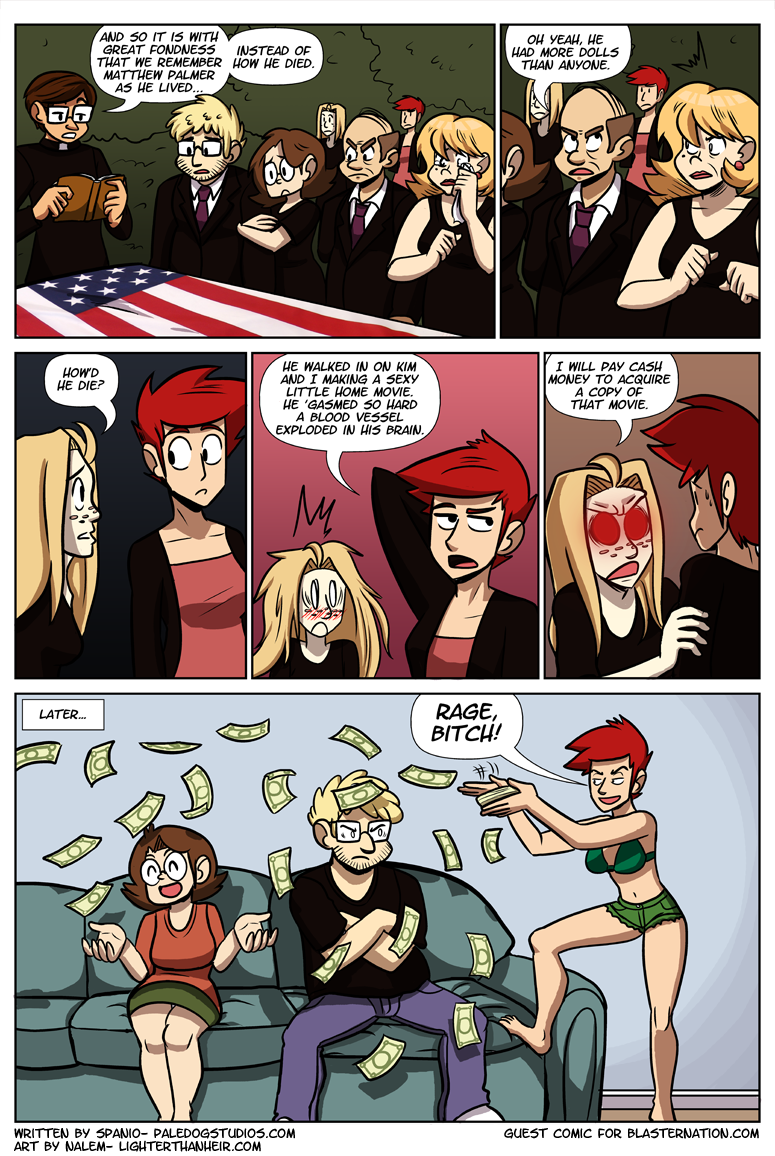 And so, as the final page of Nalem and Spanio's five-part guest saga comes to a close, so too must guest  comic week. You all did an amazing job, and I'm really proud to have such talented artists and writers contributing to us! You guys are the best! And because of you, we're rejuvinated and ready to KICK SOME WEBCOMIC ASS. And speaking of which...

STATE OF THE BLASTER NATION ADDRESS, HERE WE GO. Some important things have happened in the last week now that have pretty much taken up all my free time. I've alluded to it constantly, but now I can finally outright tell you!

But first, some very important news. You ready?

I QUIT MY JOB!

THAT'S RIGHT, LESLIE AND I ARE NOW OFFICIALLY SELF-EMPLOYED COMIC PEOPLE! We're FREELANCE, pal! Thanks to the constant love you guys have shown Blaster Nation, along with our brand new Slipshine comic series, Leslie and I are now making enough off comics to completely sustain us! Of course, Leslie was already at home working on comics while I did my 40 hours a week, so I have to make it up by keeping busy! I've got some stuff I want to tell you in a bit, but me quitting this job means I'll be cranking out more Blaster Nation and Tissue Box scripts more than ever! I'll also be updating our social medias MUCH more regularly, and in the future, I'll set up a stream and youtube channel for video games and video blogging! Of course, I have to get my old computer fixed before I can do that. All in due time, guys!

Of course, that's not enough for me, oh no! I've been hired on as the lead writer for the upcoming dating sim/puzzle game RPG that's sweeping the nation by storm! No, seriously, I totally am!

It's an awesome game called HuniePop that's currently running on Kickstarter. As soon as I saw the game, I fell in love and backed it immediately, only to realize that they were looking for a writer! I knew I'd be the most perfect for it, so I bombarded Ryan with all sorts of impressive pitches and dialogue. I'm extremely hyped for this game, but it's not gonna happen unless it gets funded! It's only a mere $2000 away, so please, help donate so we can make you an amazing dating sim drawn by some fantastic people and written by a guy you know!

That's it for now! Blaster Nation officially begins again on Wednesday! SEE YOU THEN! DONATE TO HUNIEPOP!