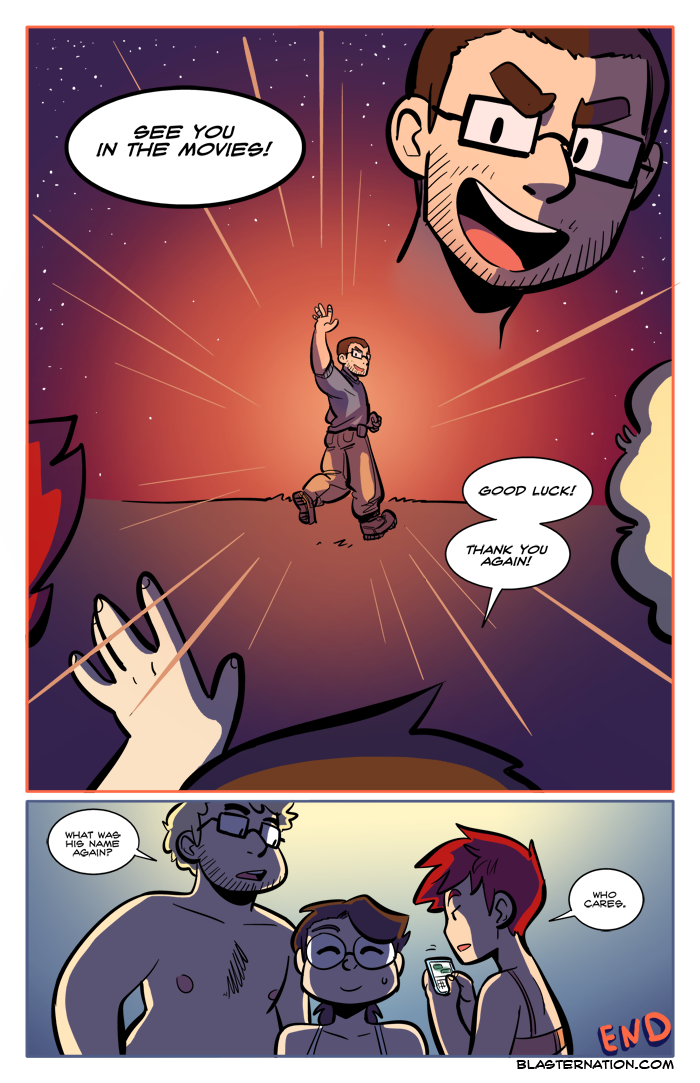 Keep an eye out for Cameron Towne later in Blaster Nation's future.

That's the end of our Kickstarter comic! Sadly, it's also the end of our buffer, and unfortunately, we didn't get as much work done as we would've liked. Over the last month, we finished up some commissions, finished a Slipshine story, got some pin-ups done, worked on Rock Cocks...some important stuff did get done, just not enough. But now it's back to work on Blaster Nation.

Here's the sad part, though. I know a lot of you are going to be upset, but Blaster Nation is going back to two updates, Wednesday and Friday. There won't be a Sunday update this week, or for a while. Will this be a permanent change? I don't know, we'd like to do three updates a week again, but right now, it's just not possible. We don't have the time to do three Blaster Nations AND at least two Rock Cocks every week, and the truth of the matter is we can't really afford to pay Freeglass three times a week for inks. The holidays are coming up, taxes are going to fucking murder us, health insurance has gotten ridiculously expensive...we need to save money. I'm sorry to dump this on you guys, but that's the situation. We'll still be doing Wednesday/Friday updates every week for Blaster Nation, and we've got a super cute Christmas story coming up that I know you guys are gonna love. But sadly, no more Sunday updates for awhile. And yes, we'll finally change the logo to reflect that.

Sorry if I bummed you out, but cheer up! The holidays are coming, which means the Blaster Nation Holiday Synchtube is fast approaching! We've got a bunch of cute, short Blaster Nation stories lined up to tell you guys! Our comics might take longer to get out, but if you stick with us, I promise they'll be worth the wait. Thank you for being so patient and understanding with us.

That's all for now! SEE YOU ON WEDNESDAY!